[u]pon assuming office, President Trump should announce that Sanctuary Cities violate federal law and that any state official who impedes federal law enforcement officials endeavoring to enforce the nation’s immigration law will be arrested and prosecuted. * * * While it is beyond federal law to permit the arrest of state and local officials who enact sanctuary city laws and policies, it is not beyond federal law (indeed, it is entirely consistent with federal law and the Supremacy Clause of the Constitution) to arrest and prosecute any such official who actually physically obstructs ICE agents from investigating, arresting, and prosecuting illegal aliens.

One wonders, though, whether “actual[ ] physical[ ] obstruct[ion]” is the only basis on which rogue State and Local officials who devise and promote “sanctuary city laws and policies” can be prosecuted.

For example, Title 8, United States Code, Section 1324(a)(1) provides (in pertinent part) that

(iii) knowing or in reckless disregard of the fact that an alien has come to, entered, or remains in the United States in violation of law, conceals, harbors, or shields from detection, or attempts to conceal, harbor, or shield from detection, such alien in any place, including any building or means of transportation; (iv) encourages or induces an alien to come to, enter, or reside in the United States, knowing or in reckless disregard of the fact that such coming to, entry, or residence is or will be in violation of law; or (v) (I) engages in any conspiracy to commit any of the preceding acts; or (II) aids or abets the commission of any of the preceding acts,
shall be punished as provided in subparagraph (B).

(B) A person who violates subparagraph (A) shall, for each alien in respect to whom such a violation occurs—

Now, it seems beyond question that—

I. This statute applies to “[a]ny person”, without exception, including State and Local public officials.

II. This statute applies even to a situation in which no more than a single illegal alien (“an alien” and “each alien”) is involved.

III. By hypothesis, the purported State and Local laws, regulations, and policies under which “sanctuary cities” operate are designed and put into practice specifically to “conceal[ ], harbor[ ], or shield[ ] from detection” “alien[s who] ha[ve] come to, entered, or remain[ed] in the United States in violation of law”.

IV. Self-evidently, the very existence of “sanctuary cities” “encourages or induces * * * alien[s] to come to, enter, or reside in the United States * * * in violation of law”. And therefore,

V. Those rogue public officials who set up and administer their jurisdictions as “sanctuary cities”, along with everyone who aids and abets them in doing so, are in each instance “engage[d] in a[ ] conspiracy” to violate § 1324(a)(1)(A)—and “for each alien in respect to whom such a violation occurs” should suffer the punishments § 1324(a)(1)(B) prescribes.

Nothing in § 1324(a)(1)(A) requires, as a condition of a prosecution, that “[a]ny person” (in Mr. Emord’s words) must “actually physically obstruct[ ] ICE agents from investigating, arresting, and prosecuting illegal aliens”.

Rather, inasmuch as purported laws, regulations, and policies are the indispensable legalistic camouflage by means of which rogue State and Local officials create and administer “sanctuary cities” for the very purposes of “conceal[ing], harbor[ing], or shield[ing] from detection” “alien[s who] ha[ve] come to, entered, or remain[ed ] in the United States in violation of law”, those officials’ creation and application of such laws, regulations, and policies for such purposes—coupled with the discovery in each jurisdiction of just a single illegal alien who has taken advantage of the “sanctuary” those provisions purport to provide—should constitute evidence sufficient for such officials’ convictions. And nothing in the criminal laws of the United States provides a specific immunity from prosecution for rogue State and Local officials who violate statutes which on their faces apply to “[a]ny person” without exception.

If Mr. Trump is serious about enforcing the laws pertaining to illegal immigration against the worst (or at least the most notorious and insufferable) scoff laws of all, perhaps proving that there are no sanctuaries in “sanctuary cities” is the way to start. 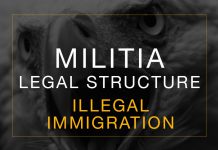 The Absolute Right of Informed Consent

How the States Can Suppress Illegal Immigration

Why Are Not Some People Quaking in Their Boots?

The President’s Authority To Suppress Insurrections

When Will “Enough Is Enough” Become “This Is Too Much”?

Usurpation and Tyranny Constitutional Militia - January 15, 2023
"Official Immunity"The Constitution itself provides for one and only one “official immunity”, in its allowance that, “for any Speech or Debate in either House...

"Unconstitutional "Powers" Constitutional Militia - January 7, 2023
As a constitutional rule of construction that cannot be repeated to often, “If *** we are at liberty to give old words new meanings ***...

Usurpation and Tyranny Constitutional Militia - January 13, 2023
“Aggregate Powers”: Powers Cobbled Together and Exercised by Rogue Government Officials That are Not Enumerated in the Constitution Typically, when aspiring usurpers and tyrants cannot rationalize...

"War" Constitutional Militia - January 15, 2023
"War": The Constitutional MeaningConstitutionally speaking, "War" is a specific set of legal relations between two or more independent nations. Therefore no "War" can be...